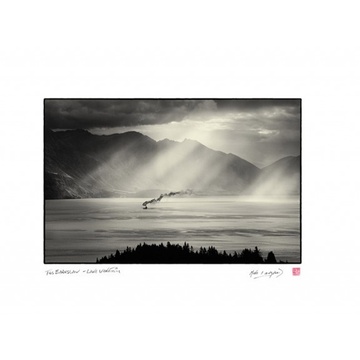 Product #40891 | SKU PRINTLAKEW
Usually Ships in 4 Weeks
what does this mean?

The TSS Earnslaw steam ship has plied lake Wakatipu for over a century, servicing the many farms on the lakes shores. Now it just makes the journey across the lake from Queenstown to Walter Peak Station carrying tourists four times a day. On this late summers afternoon, it was heading back to Queenstown when the sun broke through some storm clouds to the west, creating some dramatic shafts of light. At the same time, a dark puff of smoke came out of the steamers funnel and hung like a signature over the lake, making this timeless image possible.

Shipped in a heavy duty cardboard tube to ensure it arrives in pristine condition.