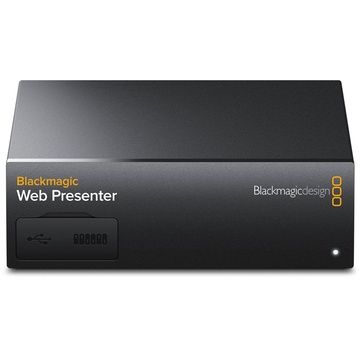 The Blackmagic Design Web Presenter is a compact desktop device that allows you to connect any SDI or HDMI camera signal and stream it live on the Web in 720p HD. Connect a camera or any other source, and then connect the Web Presenter to your computer's USB port.

The Web Presenter makes your SDI/HDMI source appear as a standard UVC and UAC compatible USB webcam, so it's capable of broadcasting video and audio on any webcam-compatible platform and software, including Skype, YouTube Live, Facebook Live, Twitch.tv, Periscope, Open Broadcaster, and XSplit Broadcaster on Mac, Windows, Linux, and Chrome OS systems. However, the magic happens thanks to a built-in Teranex conversion technology that will take your HD or Ultra HD signal and automatically convert it to the low-data-rate yet high-quality 720p resolution.

The Web Presenter features 12G-SDI, HDMI 2.0, XLR mic/line, and RCA L/R stereo audio inputs and SDI and HDMI outputs. In addition to everything it also has a built-in, two-input production switcher that allows you to live-switch programmes if you incorporate the Blackmagic Teranex Mini Smart Panel, sold separately. The optional panel adds push button controls, an LCD screen, and a spin knob, and allows you to have a presenter on an SDI camera and a slide show on an HDMI computer, and to switch between them with smooth dissolves. You can even preview video and monitor audio levels on the LCD screen before going live with your web broadcast.

Live Stream Any SDI or HDMI Signal in 720p
The Web Presenter allows you to connect any SDI or HDMI video source and broadcast it live as a webcam in 720p resolution thanks to built-in Teranex conversion technology.

Connect Virtually Any SDI or HDMI Camera
The Web Presenter features 12G-SDI and HDMI 2.0 inputs with support for all SD, HD, and Ultra HD formats up to 2160p60. An HDMI loop-out lets you set up the Web Presenter between your computer and a video projector, and an SDI output is included for master recording the output of the switcher. The SDI programme output, which is not down converted to 720p, can be used to record a full resolution master. You also get balanced XLR audio inputs for connecting professional microphones, along with RCA HiFi inputs for connecting iPods and other audio sources so you can add music or computer audio to your programme.

Re-Synchronisation
Mix and match different video sources with glitch free switching. The Web Presenter features automatic frame re-synchronisation on the HDMI input so you can work with multiple sources and automatically synchronise them to ensure glitch free switching. This advanced feature lets you transition between sources cleanly, as long as they are running at the same frame rates and resolution.

Desktop or Rackmount with Built-In PSU
The Web Presenter is based on the modular Teranex Mini. It's compact and can be used desktop-mounted, but can also be rackmounted or easily hidden. Three units fit side-by-side in a single rack space, or can be combined with other Blackmagic devices such as Teranex Mini convertors, HyperDeck Studio Mini recorders, and the ATEM Television Studio HD switcher. The Web Presenter also features a built-in power supply so you don't have to carry around extra power cables. 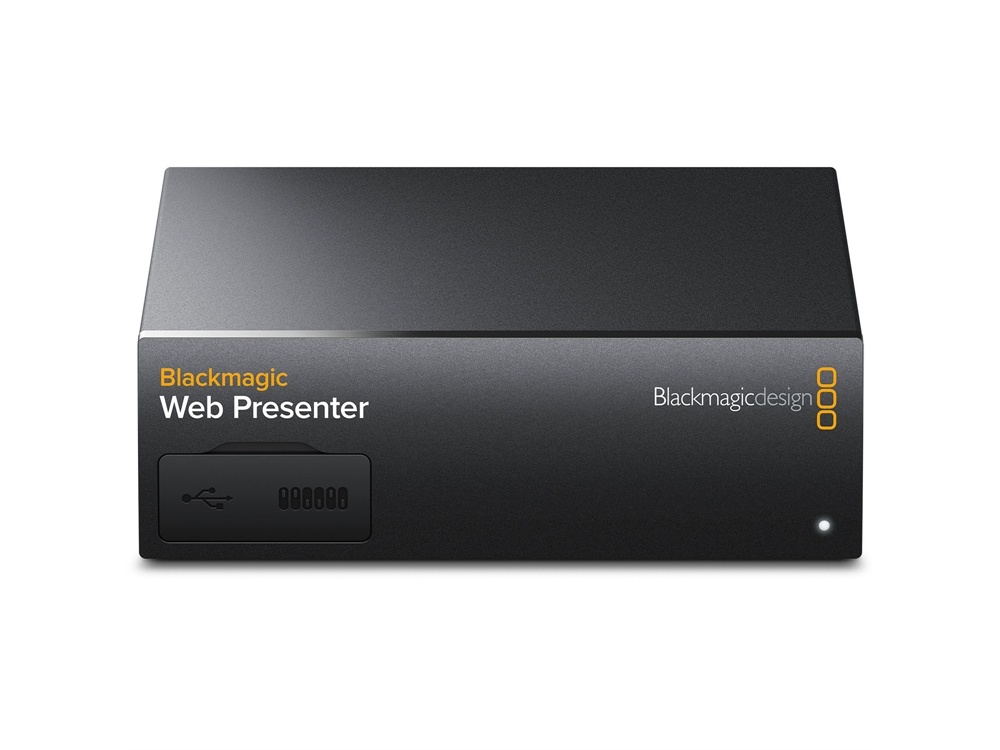