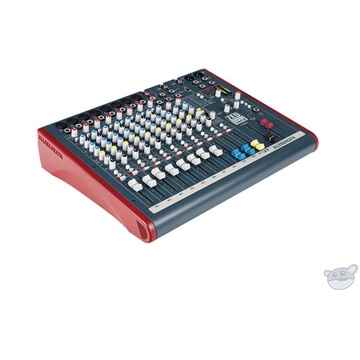 The ZED60-14FX Live and Studio Mixer from Allen & Heath is a 10-channel mixer with 16 built-in effects that is designed for an array of live and studio applications. Channels 1 through 6 have Neutrik XLR connectors for mic level signals, and 1/4" TRS inputs for balanced or unbalanced line level signals. Channels 7 and 8 also have Neutrik XLRs, but feature Class A FET Hi-Z instrument-level inputs for direct connection of electric guitars and basses. Additionally, channels 1 through 8 are all equipped with 3-band AEQ and 48V phantom power.

The mixer also features two stereo inputs (ST1 & ST2) that have 1/4" TS and RCA jacks (ST1 only) for connecting line level outputs from devices such as keyboards, samplers or iPods. Each of the stereo channels features a 2-band AEQ. All 10 channels can be routed to a "record" buss that can be output to a computer running DAW software via the USB port, or routed into a hardware recording device via the RCA record out jacks. Each channel also features a "listen" button, that when engaged takes the corresponding signal off the master and recording busses and sends it to the headphone buss. This can be useful in a live recording scenario for making discrete AEQ adjustments to a channel before adding it to the master or record busses.

Designed with versatility in mind, the ZED60-14FX's master section is equipped with balanced XLR left and right main outputs with 1/4" inserts on each channel. These inserts can be useful for inserting outboard gear such as EQs or limiters at the end of your signal chain before the master mix is output to your speakers. Also, there is a balanced 1/4" aux output for connecting additional sound reinforcement components such as a powered stage monitor, and an FX bus out that can be used to send the FX mix to additional gear such as an external effects unit.

While you can connect an external effects unit via the FX bus out jack, the mixer also features sixteen built-in digital effects that include multiple delays, reverbs, a doubler, flanger, and chorus. The DSP engine, which uses the same effects algorithms as Allen & Heath's flagship digital consoles, is designed for low-noise and low-distortion signal processing.

Rugged Design
Designed with durability in mind for live gigging and recording, the ZED60-14FX uses many of the same exact components used in Allen & Heath's larger, high-end mixers. The vertically mounted, per-channel circuit boards make servicing much easier should it be required, with the ability to remove one particular channel from the mixer at a time

Hi-Z Guitar Inputs
Channels 7 and 8 include high-impedance FET circuits running in Class-A mode for use with low-output electric guitars and basses. Designed to emulate the type of circuits used in valve guitar combos and head amplifiers, the input circuit has a soft overdrive characteristic, giving a warm 2nd harmonic character to the sound if desired

Per-Channel AEQ
Channels 1-8 are equipped with a 3-band equaliser with sweepable mids and a high-pass filter. The 2 stereo channels have 2-band low- and high-frequency shelving

Onboard Digital Effects Processor
Sixteen built-in digital effects that include multiple delays and reverbs, a doubler, flanger and chorus. The digital effects algorithms are the same as those used on the flagship Allen & Heath digital consoles

Recording Buss
All channels, including the effects buss, have switchable routing to the recording buss that is sent to the stereo RCA recording out and the USB out, useful for dropping or adding in microphones or effects to tape during a live recording scenario

USB Connectivity
When used in tandem with your Mac or PC running DAW software, the mixer can send and/or receive up to 16-bit, 48 kHz audio via the USB port 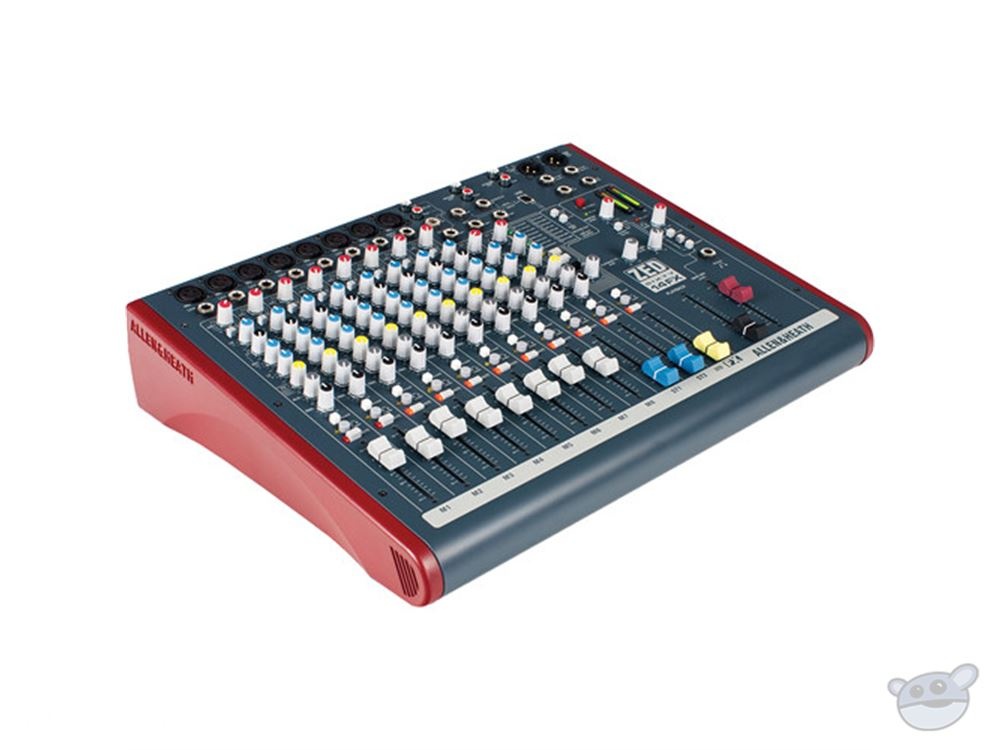