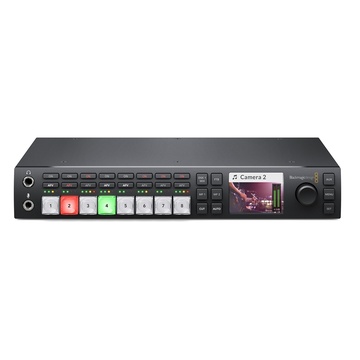 Product #41843 | SKU SWATEMTVSTU/HD
In stock with supplier Usually ships in 3 - 5 working days
what does this mean?

Designed for broadcasters and A/V professionals, Blackmagic Design 's ATEM Television Studio HD is a compact yet powerful and easy-to-operate solution. Four of each HDMI and SDI inputs are available on the rear of the chassis, and both sets of inputs support SD and HD resolution signals. The relatively small chassis can fit on a standard equipment rack with the separately available Teranex Mini Rack Shelf, so it can be brought on location for streaming video, or installed semi-permanently for recording or broadcasting from a studio.

The front panel keeps essential controls at arm's reach, while more advanced controls and settings, such as upstream and downstream keyers, graphics, media, and precise mixing for the 10 channels of available audio can be accessed through the USB interface or with an ATEM control surface. Move to the rear to reveal the BNC and HDMI connections for input and output. Multiview can be transmitted over SDI or HDMI to align with your equipment setup, and an AUX output lets you send video to an external display, which is great for live events with a projection setup. Four of the SDI outputs have embedded talkback audio for studio setups. Blackmagic Design Studio Cameras can also be controlled from the switcher for consistent looks across the board.

Available transitions include:* Cut: When you press the cut button, ATEM instantly changes from your current programme source to the preview source. Cuts can be performed by directly selecting sources or by pressing the cut button to switch to the next source on the preview bus. * Mix: The mix, or dissolve transition, gradually transitions from one source to the next by creating a smooth blend. You can set custom timings to manually blend the transition. * Dip: Just like mix transitions, a dip transition is a gradual blend that includes either a solid colour, graphic, or another clip between the two video sources. Dips to black or white between sources are the most popular, or you can use logos or sponsor graphics. * Wipe: ATEM Television Studio HD has 18 built-in wipe patterns. Choose from circles, diamonds, squares, and more. Shapes and patterns can be inverted, softened, or even have customised coloured borders. You can even insert live video into the borders for further customisation. * DVE: The ATEM Television Studio HD has a powerful built-in Digital Video Effects processor, or DVE. You can push, spin, squeeze and swoosh your live video from one camera to the next with incredible built-in DVE transitions. DVE transitions can be flip-flopped and reversed, giving you even more transition options. With 35 built-in pre-programmed moves, you can get started with advanced transitions. Graphic wipes can also be created by combining a DVE transition with a logo created in Photoshop.

Layer live video over other video sources or graphics with the Upstream Keyer. You can use luma key, linear key, pattern key, or shoot against a green screen and use chroma key to instantly composite the video over virtual sets.* Luma key: Luma keys are sometimes known as a self key because the same video source is used for cutting the key and overlaying the video image. Luma keys work best with high contrast images, like white elements on a black background, so you can use the contrast to cut the black background and replace it with live video or graphics. * Linear key: Get clean, high-quality results with linear keying by using two separate sources for the fill and the key to create one video image. The fill signal contains the video to be stacked over the background, while the key signal contains a grayscale mask to cut out, or mask, the area to be filled. * Chroma key: Used every day for TV weather forecasts, chroma keys are a powerful way of combining live images together in real time. The presenter typically stands in front of a green or blue background and the chroma keyer will remove only that colour and combine it with another image, such as a video or graphic. * Pattern key: Combine live images with any of the 18 built-in wipe patterns to combine live images or graphics with geometric shapes. You get full control over softness, symmetry, size, and position to create unique picture-in-picture effects that can be transitioned to as easily as any live source.

To automate complex sequences of precisely timed actions on your ATEM switcher, you can now create powerful shortcuts called macros. Record a sequence of transitions between video sources, including key effects, audio mixer adjustments, camera control settings, and more using the ATEM software or hardware control panel. Macros are saved as XML files that can be edited with a standard text editor, so you can combine them together to build sophisticated sequences that would be impossible to execute manually during a live production. That means you can create unique looks or your programmes that can be recalled instantly, copied between switchers, and used repeatedly when you require them.

The four SDI talkback outputs on the ATEM Television Studio HD support mix minus, which is important when you are working with remote interviewees. For example, you could remove input 5 from the programme audio on output 5, so the remote interviewee hears everything in the programme except themselves talking and won't be distracted by any audio delay.

The built-in audio mixer lets you control camera and external audio with precision level and balance adjustments on all 10 available channels. You can enable or disable channels, or activate audio-follow-video (AFV) mode instantly. Adjust the mixer via the ATEM Control Software or plug in an external Mackie standard USB fader panel.

Multiview allows you to see your sources, graphics, preview, and programme outputs on a single screen so you don't need separate monitors for your individual cameras. You get HDMI and SDI multiview outputs so you can connect professional broadcast SDI monitors, computer monitors, or even consumer HDTV sets.

Eliminate external character generators by storing up to 20 broadcast quality RGBA graphic files in the media pool. The two media players appear as input sources to your switcher. You can transition to graphics as full frame video or feed them to the keyers for overlaying video. Popular image formats such as PNG, TGA, BMP, GIF, JPEG, and TIFF are supported.

Use the included Photoshop plugin to create still broadcast graphics and instantly add them to the ATEM Television Studio HD's media pool. Add professional looking logos, lower thirds, scorecards, or other real-time graphics and get them on air in no time. 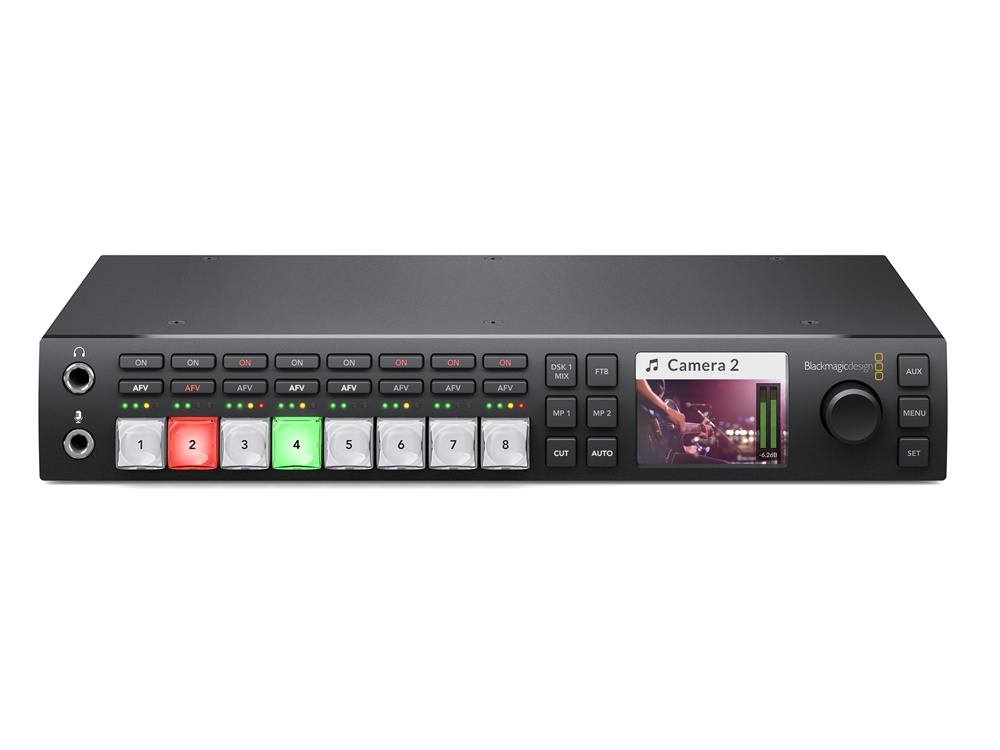