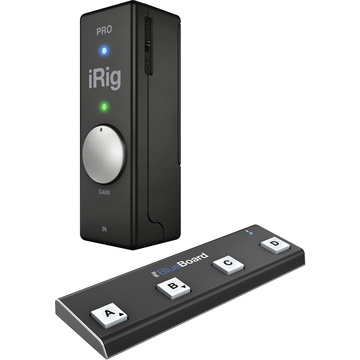 This IK Multimedia iRig Pro Interface and BlueBoard Pedalboard for iOS, Mac, PC kit allows you to connect microphones and instruments to your mobile iOS device or computer for use with music applications. The pedalboard provides assignable wireless control over Bluetooth to allow you to switch between stomp box emulations in programmes such as IK Multimedia's Amplitube or Apple's Garageband.

The iRig PRO Universal Audio and MIDI Interface for iOS and Mac from IK Multimedia allows you to record audio and MIDI data from external instruments, microphones, and 5-pin DIN MIDI controllers to your Mac or compatible iOS device. It features a single combination XLR/TS input and preamp that is capable of providing 48-volt phantom power to condenser mics. Once your audio source is connected, it can be recorded to your Mac or iOS device in up to 24-bit/48kHz quality.

In addition to audio, the iRig PRO can connect to MIDI gear with the included 5-pin DIN to 2.5mm cable, allowing you to use it as a MIDI interface. IK Multimedia also includes a USB cable and Lightning cable, providing connectivity out of the box regardless of your device. It is powered by the included 9-volt battery or via USB bus power if connected to your Mac.

The iRig BlueBoard Wireless MIDI Pedalboard from IK Multimedia operates on Bluetooth 4.0/Bluetooth Low Energy technology to wirelessly control your iOS and Mac music apps while performing or recording. It has four LED backlit control pads that can be used to switch between presets, change patches, and turn effects on and off in any Core MIDI compatible app such as IK Multimedia's AmpliTube, VocaLive, SampleTank, the iGrand Piano or Apple's GarageBand. The BlueBoard features two 1/4" TRS inputs for use with MIDI expression controllers to add wah or volume pedal effects to you performance. It is powered by four AAA batteries and has a range of operation up to 10 metres.

48 Volt Phantom Power
Studio condenser microphones require 48 volts of external power to function. With iRig PRO, you can plug your condenser mic in, flip the phantom power switch and record until your heart's content. You don't need to purchase 48 volts worth of batteries; a simple standard (and included) 9 volt will work just fine for this

MIDI
The iRig PRO also functions as a plug-and-play MIDI interface. Use the included 5-pin DIN MIDI cable to connect any MIDI keyboard or other controller to your iOS device or Mac and play virtual instruments or change parameters in Core-MIDI-compatible apps and software

Take Control
The iRig BlueBoard connects to your compatible device via Bluetooth, and when you press its foot switches, it sends out control signals that are converted to MIDI by the iRig BlueBoard app. You can place it up to 10 metres away from your device and still maintain full control of your apps

Backlit Control Pads
The BlueBoard has four backlit control pads with an additional LED that lights when the pad is active, letting you know which control is on

Bluetooth
Because the BlueBoard communicates with your device via Bluetooth, it leaves the connector free for for use with other accessories

Designed By and For Musicians
Musicians with now be able to play and control their preferred iOS app on stage or in studio with the freedom of not being tethered by cables. The iRig BlueBoard is small enough to fit in a laptop bag for transport to and from gigs

Compatibility
The BlueBoard is compatible with the iPhone 5, iPhone 4S, the iPod touch 5th generation, the iPad 3rd and 4th generation, and the iPad mini. It also has compatibility for any iMac, Mac Mini, MacBook Air, and MacBook Pro from June 2012 on. It requires iOS 5.1 or later and Bluetooth 4.0/Bluetooth Low Energy 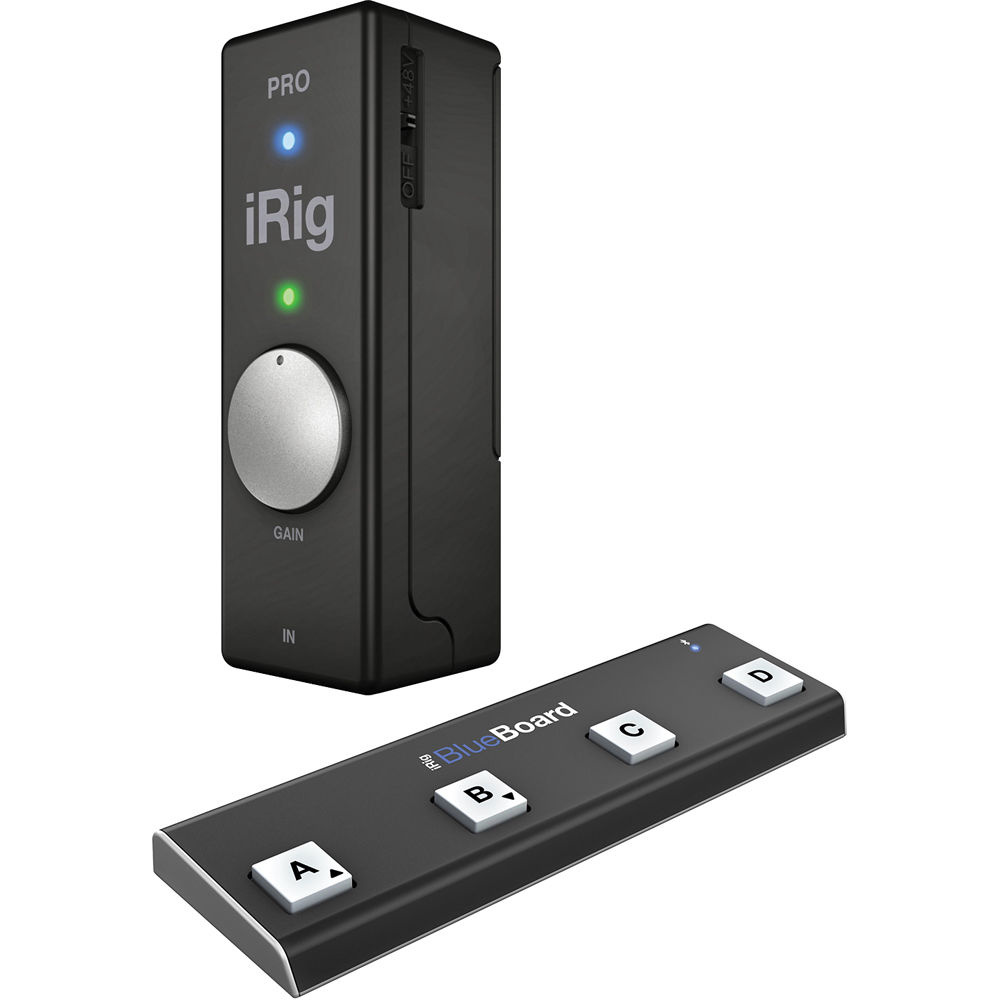