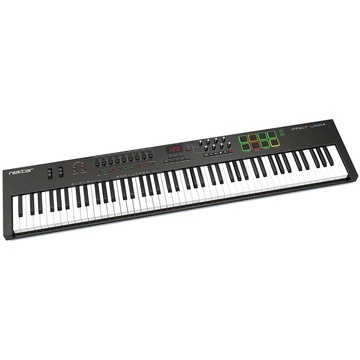 The Impact LX88+ from Nektar Technology is an 88-note, velocity-sensitive, semi-weighted action keyboard, with medium tension, which amongst other things, provides more reach for the performing musician. The full-size, piano-style keys are covered to protect against dirt and dust, and the keyboard can be set to one of four available velocity curves, along with three fixed-velocity levels for instances where consistent output is required. It features intelligent mapping for manipulating integral aspects of all major DAWs from the controller, while for those preferring to control MIDI hardware, a build-in MIDI Out port is provided, as well as extensive MIDI programming options.

The keyboard can send on up to three zones at the same time. Octave and transpose buttons are available, as well as pitch-bend and modulation wheels. Eight velocity-sensitive pads allow you to finger-drum in the MPC style, though each pad can be assigned any MIDI note number or MIDI CC message for use as MIDI-trigger or toggle buttons. The keyboard includes the Bitwig 8-Track DAW for music creation, and allows for optional connection with iOS devices.

Send on up to three zones at the same time. When split or layer is active, the corresponding LED button is lit so there is no confusion. Each zone can be programmed to send on its own unique MIDI channel with essential settings, either pre-programmed, or adjustable during performance. Two transpose buttons below the Split and Layer buttons allow for selecting four functions on the fly for making changes at any time, even while playing. A key combination makes assignment quick and easy with the LED display telling you which function you have selected. Choices include sending out MIDI Programme Messages, change the Global MIDI Channel or select any of Impact LX88+'s five user presets with either the Octave or Transpose buttons. Pressing either split or layer while pressing the Transpose buttons will change the setting currently assigned for the corresponding zone.

Nine 30mm faders, nine MIDI buttons, and eight encoders line the top of the control panel. Each control is fully programmable to send any MIDI CC message for use with hardware or software MIDI products. Used with Nektar DAW integration, the controls provide seamless but flexible operation over most DAWs. Personalised settings can be stored in any of the five Impact LX+ presets for recall at any time. If you switch Null on, any parameter values are stored when you change presets so you avoid parameter jumping.

Nine LED buttons can be programmed with a variety of MIDI messages including sending specific MIDI Programme changes. The last MIDI Programme message sent is remembered so a corresponding LED button illuminates correctly, even if Programme was sent via, for example, the transpose buttons or the Setup menu. You can also assign the 8 pads to send Programme messages so you'll have instant access to 17 buttons without changing preset or pad map. Used with Nektar DAW Integration the LED buttons indicate status for a number of parameters. In Instrument mode, an instrument plug-in's switch parameters can be learnt with the LED telling you when it's on or off. In Mixer mode the LED buttons control Mute and Solo, with the LED colours indicating the corresponding channels current status.

For groove and beat creation, this keyboard boasts eight velocity-sensitive pads, calibrated to trigger at a light touch, and suitable for finger-drumming, providing an even velocity response. Each pad can be assigned any MIDI note number or MIDI CC message for use as a MIDI trigger or to toggle buttons. The "Pad Learn" function allows for easy assignment: simply select a pad, play the note or drum sound you want on the keyboard, and the assignment is completed. Assignments are stored over power cycling so you don't lose your settings when you switch your system off. In addition, four pad-map locations can store settings for future recall. Four-colour LED illumination indicates which pad map is currently loaded and can even tell you which type of MIDI message each pad sends.

Software integration supports most of the popular DAWs with a common workflow, providing access to many of the functions most likely to needed when recording and performing. Simply complete the installation process and start making music. DAW integration currently supports Cubase, Digital Performer, FL Studio, Garageband, Logic, Nuendo, Reaper, Reason, Sonar and Studio One. Buttons and controls are labelled so you don't have to remember how they are assigned.

Press mixer and the eight pots are assigned to control the eight channels of your DAW's mixer. The alternate Bank up/down function moves control assignments to the next or previous group of eight channels. Press the [Mixer] button and they switch to control pan. The fader is assigned to the currently selected channel so you always know where to find it. The pads also have alternate functions and can control Mute for the current bank. The buttons under the faders follow the channel assignment of their corresponding fader and can control Mute or Solo with LED's indicating current status. Pan for the group of eight channels controlled by the faders is handled by the eight pots. Fader 9 is used for control volume of the current mixer channel as well as master volume. Additionally, shortcuts are available for opening and closing the DAWs mixer window for added visibility.

The Instrument button assigns all controls to instrument parameters once an instrument track is selected in the DAW. Nektar mapping ensures this is done automatically, and many devices and plug-ins are pre-mapped to match the blue control labels on the controller. The Nektar "Grab" mode allow for temporarily assigning parameters to controls as you work on your project. Some DAWs even supports saving "grabbed" parameters to a Nektar map which means you can completely customise your assignments for future use.

If you mainly want to use a DAW's MIDI learn features, there are two non-overlapping, read-only presets on the Mixer and Instrument buttons, so you can quickly switch between independent and unique setups. In addition, five user presets are programmed for GM compatible and "learn-friendly" setups plus they can be overwritten with custom settings.

As a low-powered USB device, this keyboard works with all USB devices that feature a Class-compliant MIDI driver. You can also hook the keyboard to an Apple iPad using the iPad's optional USB camera-connection kit (available separately).

Bitwig 8-Track is included with your purchase, giving you access to over 50 software instruments and effects for use on up to eight audio or MIDI tracks, and providing third-party plug-in support as well. Bitwig also offers a selection of loops, clips, and samples. 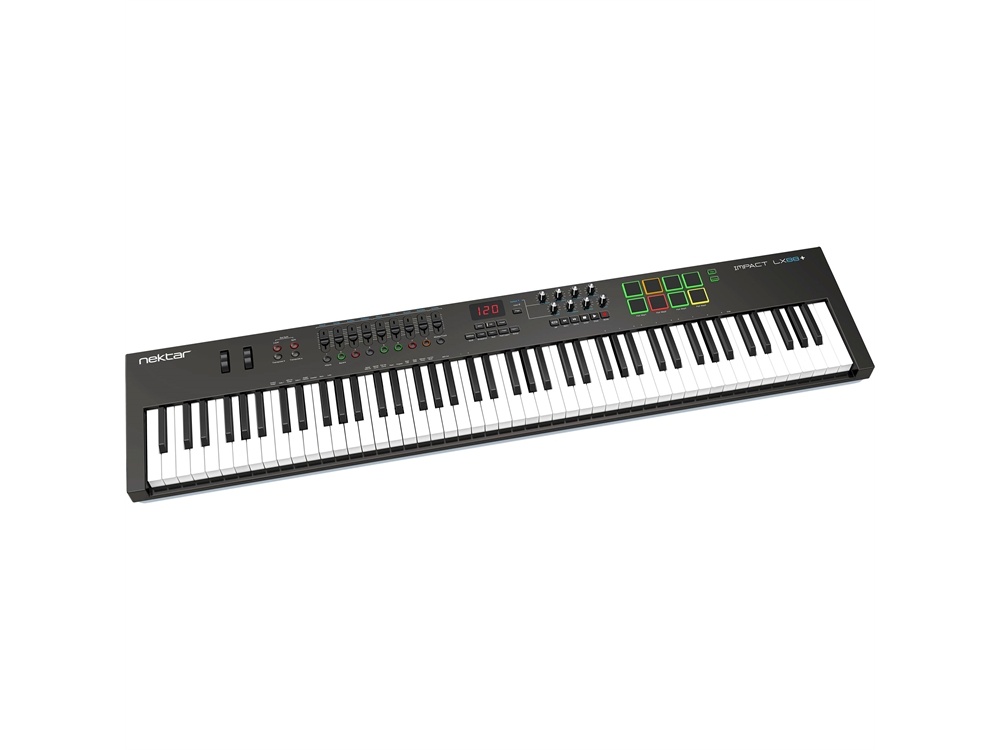