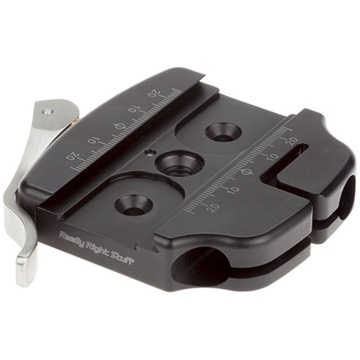 Product #41893 | SKU B2-LR-VC CLAMP
Availability on request
what does this mean?

The B2-LR-VC Lever-Release Clamp from Really Right Stuff is compatible with all of Really Right Stuff's rails, camera bars, and release plates and with most Arca-type quick release plates. Attaching the lever-release clamp directly to a PG-02 Gimbal Head, which is similar to a fluid head, creates a smooth panning head for video use. No matter what orientation the clamp is in, it has two smooth mounting holes that accept an optional video arm control handle. The video handle is secured into the side of the clamp by tightening one of two hex bolts with the included hex key.

The lever-release has three distinct positions that control the opening of the clamp's jaws. Fully open it allows the plate to top-load into the clamp. With the clamp halfway open, this lets the plate to slide in only. Of course there is the closed position to keep the plate in its place. When fully locked down, the cam mechanism in the lever raises the holding power of the clamp to 22.7 kg. The clamp's locked position can be easily identified by seeing what location the lever is in, and the lever's cam can be opened or closed with just finger force.

The CNC machined 6061-T6 aluminium clamp has an anodised type II black finish, and a corrosion-resistant stainless steel cam-locking lever. On top of the clamp all mounting holes are countersunk to accept flat head screws, and the centre hole is threaded 3/8"-16. A laser-engraved scale, in 1mm increments, is also located at the top of the clamp.