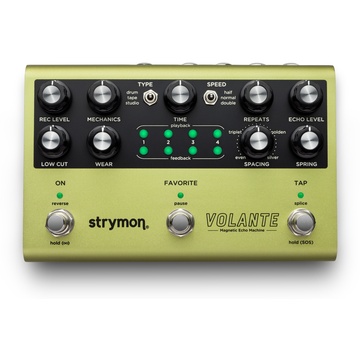 The Strymon Volante Magnetic Echo Machine delivers the full gamut of analog-style echoes — magnetic drum echo, tape echo, and reel-to-reel studio echo. It’s also a stereo multi-head delay with an onboard looper and independent vintage spring reverb. You can really dial in the vintage vibe with this pedal, from the natural saturation and soft clipping of overdriven magnetic media to mechanics, wear, head spacing, machine speed, and more. Enjoy complete control of every parameter via MIDI. Store up to 300 presets. Take command via expression pedal — Volante is primed for maximum emotional expression. Beyond that, instrument/line-level capabilities make it equally at home on your pedalboard or in the studio. Volante includes tap tempo, 24-bit/96kHz sound quality, and selectable true bypass/analog buffered bypass switching — it’s one of the most feature-packed delays on the market.

Volante can conjure up just about every type of analog-style echo you can dream up. Its Drum setting yields the warm, harmonically rich, saturated sound of a magnetic drum echo — you can almost smell the tubes cooking. The Tape setting serves up well-crafted multi-head tape echoes, complete with smooth tape saturation and tape’s characteristic nonlinearities. The Studio setting reproduces the unmistakable sound of a classic reel-to-reel machine, giving you a clean, pristine sound that’s overflowing with full-bodied warmth and fidelity.

Each of Volante’s four playback heads can be set for full volume, half volume, or off. And independent of playback level, you can switch each head in or out of the feedback circuit — you can even switch heads into the feedback circuit that aren’t activated for playback. You can also pan each head individually. Guitarists here at Sweetwater have had a blast crafting interesting, complex rhythmic patterns, unique atmospheric textures, and interesting psychoacoustic stereo images with Volante.

You can use Volante to create loops — with a magnetic personality. These loops degrade and evolve, and you can play them in reverse with a tap of your foot. Pause them for a mechanical tape stop effect, or change their speed. Or if you really want to bring on sonic Armageddon, press and hold a footswitch to unleash classic psychedelic delay feedback. With a bit of experimentation, Volante can yield rich, hypnotic, unpredictable — but musically rewarding — results.

Vintage multi-head tape machines could be a bit finicky. Their heads weren’t always evenly spaced, which led to all kinds of interesting sonic interactions when multiple heads were set to repeat. Volante takes this into account with a Spacing control that’s adjustable between Even, Triplet, Golden Ratio (for dense, non-overlapping echoes), and Silver Ratio (for non-overlapping repeats biased toward the quarter note). And the Spacing control is continuously variable, allowing you to morph between its settings in real time.

Like many classic tape echo machines, Volante includes an independent spring reverb, allowing you to add dimension to your playing while imparting a gorgeous, gentle character. Volante’s spring reverb infuses your tone with an inimitable vintage vibe while enhancing your delayed signals. 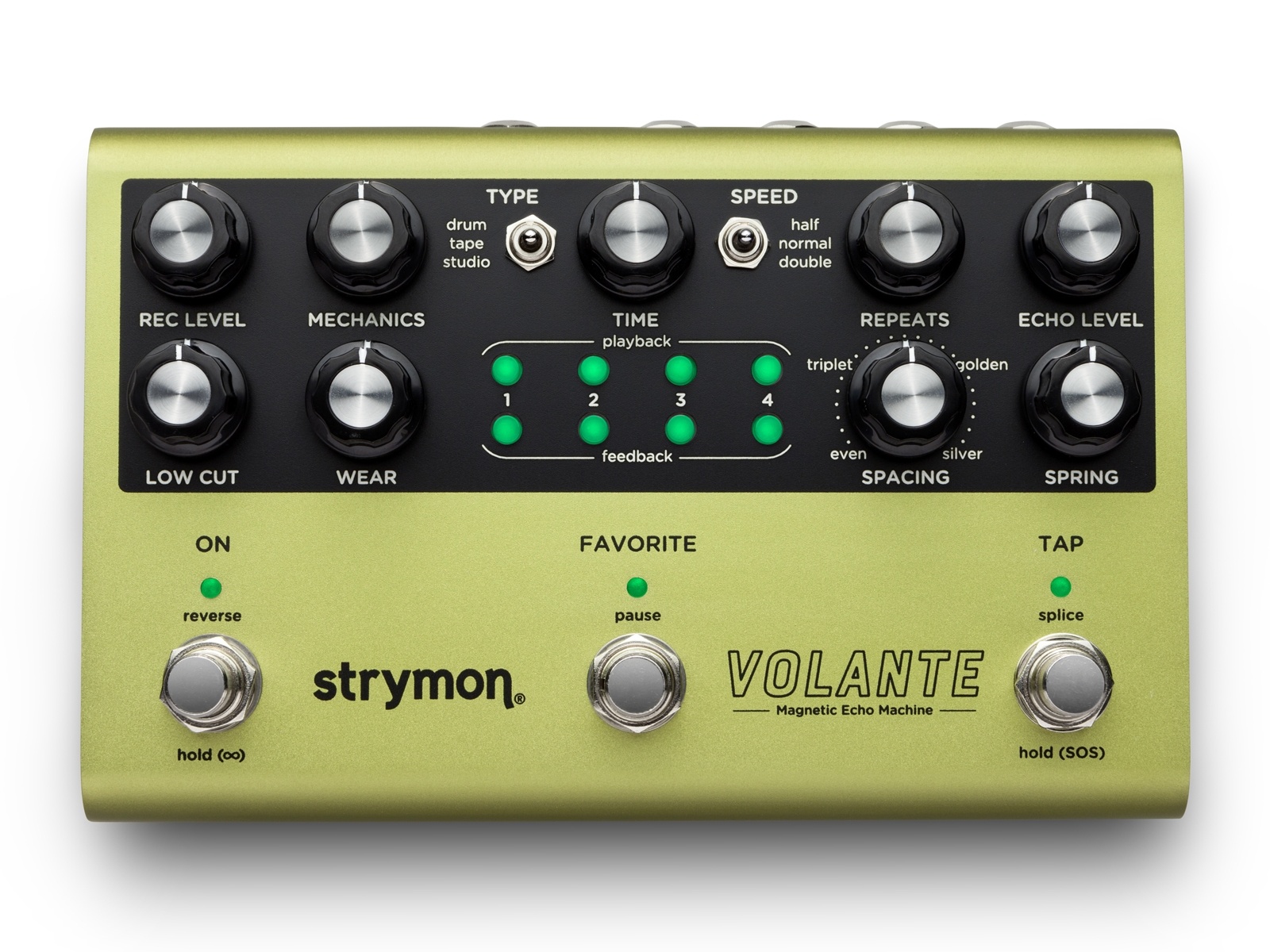