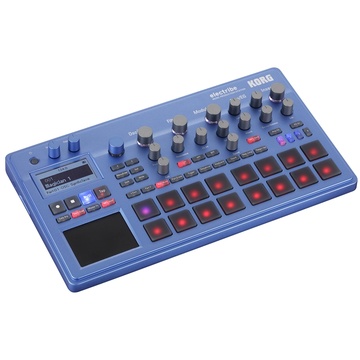 Product #37441 | SKU ELECTRIBE2BL
Enquire for ETA
what does this mean?

Providing sounds for modern House, Techno, and EDM production while taking its cues from some of their most popular hardware synth and effect units, the blue Electribe Music Production Station from Korg now features the latest V2.0 system software with added enhancement sure to make your production flow faster and easier. The Electribe blue still features the same 16 velocity-sensitive pads and an integrated XY touch pad for effects and programming. There are 409 analogue-modelled and PCM-oscillator waveforms as well as 200 presets to help get you started. Updated features include pattern-chaining, undo, and original-value display, as well as over 200 bonus patterns available for download, offering synths, drum kits, and ideas that cover a wide variety of modern genres and musical styles.

Your sounds can be can be altered with a variety of available insert effects in addition to master effects, some of which have been inherited from Korg's Kaoss Pad. The Electribe can be powered with the included AC adapter, or used portably with 6 AA batteries. Compatibility with a wide range of equipment is made possible with the 2 included MIDI adapters.

An Evolved Step Sequencer
Using the 16 pads placed on the front of the unit, you can create patterns while actually hearing and seeing the sounds. You can use the pads as a keyboard to record phrases in real time, and also perform step recording by entering the pitch and rhythmic value one note at a time. The patterns you create can be used in alternate forms as you perform by taking advantage of the "step jump" feature inherited from the Volca series, or by changing the "last step" to vary the length of each part.

There's also a "motion sequence" function that lets you record knob and button operations and use them in the pattern that you create.

Either drums or synths can now be assigned to each of the 16 pads. For example, you could create complex rhythms by assigning drums to all of the 16 parts.

Beat-Making with the Trigger Pads and Touch Pad
Derived from the Kaossilator is the "touch scale" function that lets anyone perform without wrong notes, just by moving a finger across the touchpad. The trigger pads that were popular on the Taktile are also provided, allowing anyone to create phrases. The trigger pads can also be used for drum input. Settings allow you to switch velocity on/off.

The filters at the heart of the sound-shaping capabilities are inherited directly from the KingKORG, and they use filter algorithms that simulate standard synthesisers so that you can get "the sound" which was used in famous songs, just by selecting the appropriate filter type.

You can also apply filters to drums to create rhythm tracks with tonal variation. Modulation can make sound creation more complicated, but Korg has condensed it down to three parameters: simply select a template that specifies an effect and its target, and then adjust the speed and depth of the effect to suit your taste.

Effects and Groove Templates
The Electribe sampler provides effects such as compression and overdrive for each part, giving you uncompromising control over the nuances of individual sounds that differ subtly between genres. The groove function can be specified for each part, letting you apply a groove to your phrase simply by selecting a template.

Master Effects, Patterns Sets, and Sync In/Out
The master effects can be controlled from the touchpad just like on the Kaoss pad, and they include not only spatial-type effects that shape the overall acoustics but they also include effects that apply aggressively musical transformations such as the "Vinyl Break" effect inherited from the Kaoss pad series, and the newly developed "Seq Reverse" and "Odd Stepper" that change the playback order of the sequencer. These are also extremely effective for live performance. Insert effects can be assigned for individual parts, opening up even more complex sound-design possibilities.

There's also a "pattern set" function which lets you switch patterns by pressing trigger pads, and an "event recording" function that records that performance. In addition to MIDI IN/OUT, "Sync IN/OUT" is provided, allowing synchronised performances with the Volca series, Monotribe, or MS-20 Mini. The unit can run on six AA batteries, so you can easily take it along with you and perform anywhere, providing on-the-go inspiration to your musical ideas.

Workflow with Ableton Live
Korg has collaborated with Ableton to offer a new music production workflow that combines hardware and software. The Electribe Sampler can internally save and export patterns in Ableton Live format. Individual patterns and parts are saved as scenes and clips in an Ableton Live Set. Use Live's Session and Arrangement workflows to edit and refine your ideas, perform or record new parts, arrange your ideas, and mix your song. The Korg Electribe Sampler includes Live Lite. 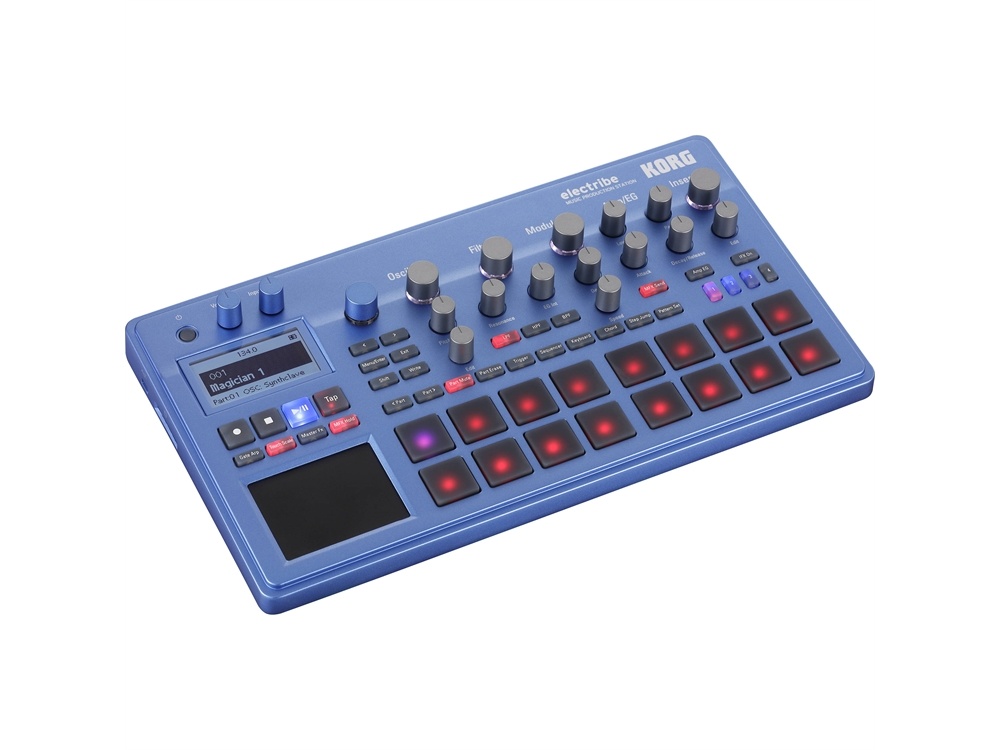